The sound of silence...

Having been without a voice for the past week (and thankful I have been released today and am now speaking again), has been a most humbling experience.  It is amazing how both listening and speaking changes without words, or at least the sounds of words.  Sure, I was prepared to write notes to others when I wanted to say something, but honestly, what I discovered was that in doing this, I took more time to think about what I wanted to say, and often decided I really had little I wanted to say.  The simple effort of writing out a comment makes one become more introspective (or is it self-editing?), and in doing so, I became more tuned in to the value of each word or thought I wanted to say (or rather, write).  Sort of funny/strange really, and the only thing that kept my spirits up was the notion that the silence would soon end and I would be allowed to once again speak.  But it did give me plenty of pause for thought about people who cannot speak, and what daily life is about for them.  You start living inside your own head, or rather thoughts, and you start to hear/listen more attentively to the world around you.  And even more curious is how others interact with you if you cannot speak.  They treat you differently!  While on the surface it appears kind, it is not necessarily better.  Don't get me wrong, the intentions are always good, but the actions are still different.  It helped me realize how much our thoughts and actions are tied to our words and how we express them to one another.

It all brings me back to what my blog is ultimately about, or hope it to be about.  You see, for me it is a diary, capturing my thoughts about my work in clay, art, travel, and so many other life experiences that come along.  My commitment to it is to be consistent and honest, regardless of the many times I feel lazy, or trite.  The only difference here is that through a blog I also invite others to look over my shoulder as I think out loud.  I tend to believe I am not covering anything new or profound, yet my thoughts and feelings about life and art are real, at least they are to me.  And if they are of interest to anyone else (which it surprisingly appears they are!), well...I guess I am not sure what to say about that.  But it may underscore that we, as humans living in the 21st century, do share many of the same fears, joys, family concerns, experiences, etc., and by sharing them with others we simply confirm our own humanness.  And more so, we are not alone, even when in silence!  Striving to find a way to say this through my clay work remains the challenge in front of me each day I am in the studio, and that challenge, as difficult as it may seem at times, is ultimately much easier to accept than the challenge of living in silence.

As I mentioned in the last post, no one gets out of this alive, yet we sometimes carry on each day as though we will live forever.  Recent experiences with health issues have at least confirmed this for me.  I now know of two things I am certainly sure of:  one is that I will not be elected the next Pope, and the other is that life is finite!  The trick in the latter is to look at each day anew, and make the most of it, and limit yourself to being unnecessarily exposed to the negatives in life that can so easily create decay in our days.  With this said, I hope to find the courage needed to discover the personal relevance in the things I make in the studio, and not fear the failures that seem to sneak in as well.  As a result, and in keeping with the posting of images from the studio for work-in-progress, I present both new work in the form of serving bowls in trays (thinking of a variety of foods eaten together, with family or friends, while thoughts of things utilitarian permeating my thoughts), and failures, in the form of pieces blown up in a recent bisque firing.  And with all I have experienced lately, the blown up pieces were the easiest for me to accept in the course of my day.  Crazy, huh?  (although I am not suggesting I would easily get used to that happening!)  The real threat to ones work is not in the failures, but rather in the absence of time in the studio. 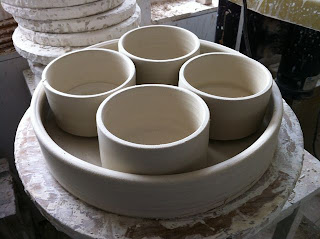 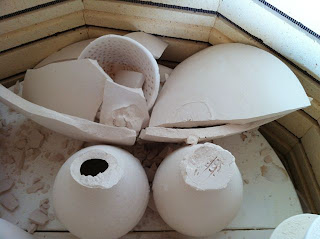 Posted by Joe Molinaro at 5:50 PM No comments: